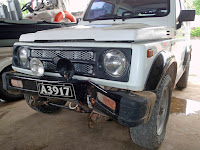 Previously rumoured to be Auki’s favourite car, with 5 potential buyers (prior to giving any indications of selling!) the samurai has lost it’s podium in one foul swoop. This intrepid adventurer surviving river crossings, overloading with wantoks and negotiating our perilous drive with the ease of a pikinni climbing a coconut tree, would not have believed it’s demise would occur as a result of a stuck 4x4 transfer gear lever. There it was, last night . . . alone outside the government buildings. Some have tried to argue in a thrill seeking attempt the samurai independently rolled across the level carpark, raced down the slope colliding with the tree. We believe it was pushed.

What could be more riskier for a car with 5 good tyres than being isolated outside its secure compound facing a Friday night alone in Auki township. The samurai knew Rob was going to restore it in the morning ready for further adventures.

Alas, wrangling about the cause does not change the outcome. Although vital parts are intact, the samurai has been bent beyond rectification. The end of the samurai has come. And with it the end of freedom of exploration and the ushering in of hardship with the completion of the Kilu’ufi workshop. 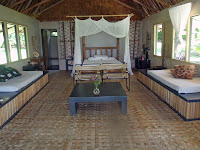 Rob and I have discovered a wonderful tropical hide-away. Tavanapupu Resort. We had the privilege of staying there 4 nights. This is where we insert a huge rave about everything – the service (second to none – the staff are truly legendary, no glass is allowed to empty, ladies are served first, nothing is a hassle, 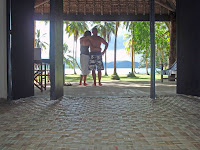 filleting and cooking fish in their kitchen is greeted with smiles and offers of freshly baked bread to accompany your catch), the accommodation is amazing, tasteful, the beds allowing even us a sound night sleep, location is superb - beautiful grounds, gardens, snorkelling and fishing available. Good swimming beach including shade from the sun. Enjoy a pleasant walk around the island. And that’s while it’s still under renovation!
Posted by Steve, Kel, Rob & Lara at 12:04 pm No comments: