Another feature in the month of the family

As it has been fairly difficult for us to access a computer lately, I am very sorry that this entry has been so slow in making it to the blog. It is certainly not due to the lack of importance of my family’s visit, just the logistics have been tricky. So, as I alluded to above, we had a visit from my parents, Jan and Karl, and my brother Antony, at the end of last month. This was their third time to the Solomons, but their first time to the provinces. So really, it was like their first real visit to the Solomons, as previously they had only been to Honiara.

They arrived on one of the wee Solomon Airlines flying matchboxes, not even too late by Solomon standards, touching down onto the grass runway, dodging the chickens and SolBrew cans (the pigs stayed on the adjacent soccer field, fortunately), close enough for me to see Mum waving to me from the window. After some screeching and hysteria (from me), we cruised back home on the Sol Air shuttle bus, and I felt a decent flicker of pride as they pointed out different things along the way and how extravagantly green all the surrounds were.

We treated Mum, Dad and Antony (hereafter MD&A) to a traditional cooking lesson with our friend Jerry and his family up at Dukwasi village. We got to consume the fruits of our labour the next day for lunch after watching some traditional dancing (with a few modern touches, such as the gold wristwatch of the male leader – a little incongruous with the grass skirt!). Dad had a large audience of goggle-eyed kids astonished at seeing a white man swing a bush knife to cut firewood. 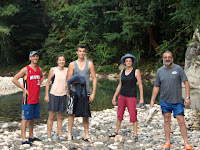 Antony got very well-acquainted with the hammock, and ensured he had at least a couple of hours in it each day we were home. The onset of the power crisis meant that we had some enforced relaxation time, and Antony had a full afternoon in the hammock one day. MD&A endured a lot of walking up a lot of hills, but only Mum was able to hobble away from the experience with a black-and-purple toe…we’re not sure exactly how she managed that!

It was fun for Steve and I to get to do some “touristy” things with MD&A (not that there is heaps to do), and we finally made it up to the limestone caves with our friend Jerry. We had heard quite a bit about them from other visitors, and it was all true – the bats (they really stink!), the mud, the water…. but also some spectacular parts that you’ll have to come and see for yourselves: cathedral-like chambers with beautifully arched ceilings, and one part where the cave roof collapsed that has now become a lushly-overgrown clearing with hundreds of trailing vines, and you might see Gollum slinking by if you look very carefully..

Another big highlight of MD&A’s visit was our two night down at Langalanga, at Serah’s Lagoon Hideaway. It was so good, in fact, that it deserves an entry all of its own. Stay tuned..
Posted by Steve, Kel, Rob & Lara at 4:27 pm